One of the most colourful chapters in Australian criminal history has finally closed with the death of infamous cop turned crook Murray Riley aged 94.

Underworld sources said Riley, who rose to the rank of detective sergeant before embarking on a career as an international drug trafficker, died in Queensland.

He was still technically on the run from British authorities, after escaping from prison in 1993 while serving a sentence over a £40million computer fraud conspiracy.

Before disgraced detective Roger Rogerson shot his way into public infamy, big-dreaming Riley was the most notorious policeman-gone-bad in the country.

Riley had been a champion rower who won gold medals in the double sculls at the 1950 and 1954 Empire Games and bronze at the 1956 Melbourne Olympics.

His rowing partner in those events, fellow policeman Merv Wood, would go on to be New South Wales police commissioner at a time Riley was a major Sydney criminal. 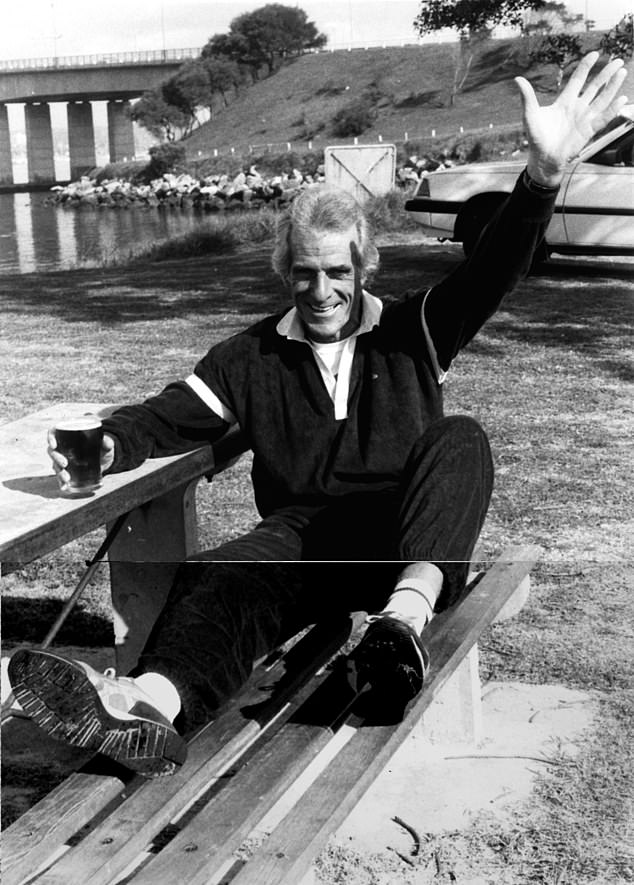 One of the most colourful chapters in Australian criminal history has closed with the reported death of infamous cop turned crook Murray Stewart Riley aged 94. Riley, an Olympic rower who became an international drug trafficker, is pictured after his release from jail in 1984 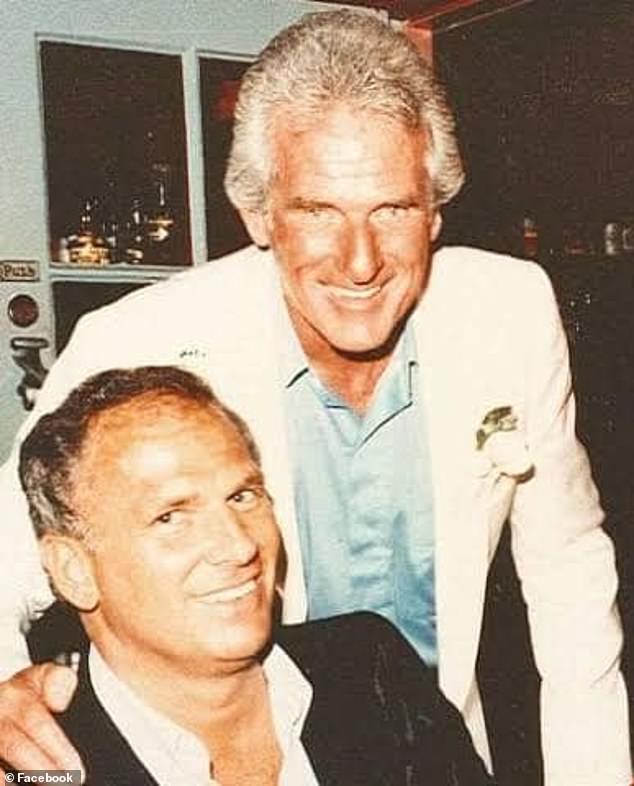 Riley was a longtime associate of the city’s late Mr Big of crime, Lennie McPherson, and helped give armed robber Neddy Smith his start in the heroin trade. Riley is pictured (standing) with Smith in the 1980s 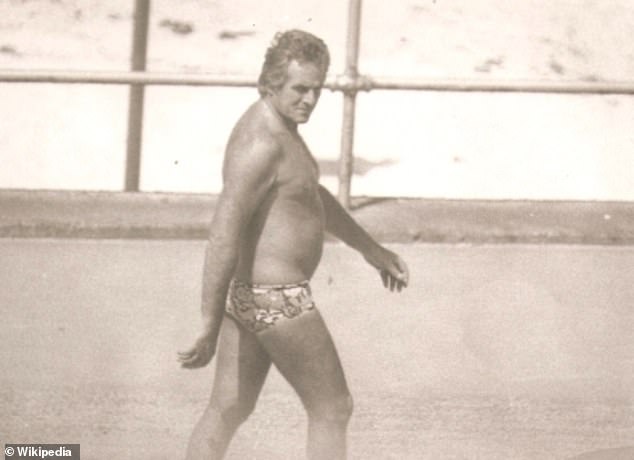 When he died Riley (pictured) was still technically on the run from British authorities, after escaping from prison in 1993 while serving a sentence over a £40million computer fraud conspiracy

Daily Mail Australia understands Riley died on the Gold Coast some months ago but word only reached many of his old criminal network over Christmas.

Riley was a longtime associate of the city’s late Mr Big of crime, Lennie McPherson, and helped give armed robber Neddy Smith his start in the heroin trade.

Smith surpassed his mentor in notoriety but not in criminal imagination, as he described in his 1993 memoir Neddy: The Life and Crimes of Arthur ‘Neddy’ Smith.

‘We used to call Murray “The Prince of Promises”,’ Smith wrote. ‘He used to come up with a new scam at least once a day.

‘Maybe – and I mean maybe – one out of every hundred came to anything.’

Smith wrote that Riley was a natural showman with a strong sense of humour and a zest for life. He greeted everyone he liked with ‘Hello, son’.

A source who knew and liked Riley said: ‘He’d charm a rattlesnake out of a tree.’

Murray Riley Riley was a champion rower who won gold medals in the double sculls at the 1950 and 1954 Empire Games and bronze at the 1956 Melbourne Olympics. He is pictured (right) near the Sydney Rowing Club at Abbotsford on the Parramatta River in February 1952 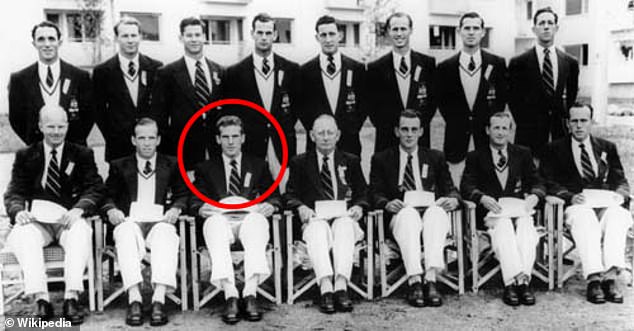 Riley’s regular rowing partner Merv Wood was NSW police commissioner from 1977 to 1979. Riley is pictured at the 1952 Helsinki Olympics where he was eliminated in the semi-final repechage in the same event

Murray Stewart Riley joined the NSW Police Force in December 1943 and came under the influence of corrupt senior officers including Ray ‘Gunner’ Kelly and Fred Krahe.

He was awarded the Queens Commendation for Brave Conduct and reached the rank of detective sergeant third class before resigning in February 1962 while facing disciplinary charges.

The same year Riley became sales manager of a poker machine distribution company and in 1966 was sentenced to 12 months’ jail in New Zealand for trying to bribe a local detective.

Upon his deportation Riley was hired as a poker machine supervisor at South Sydney Junior Leagues Club at Kingsford by its wayward president Wally Dean. 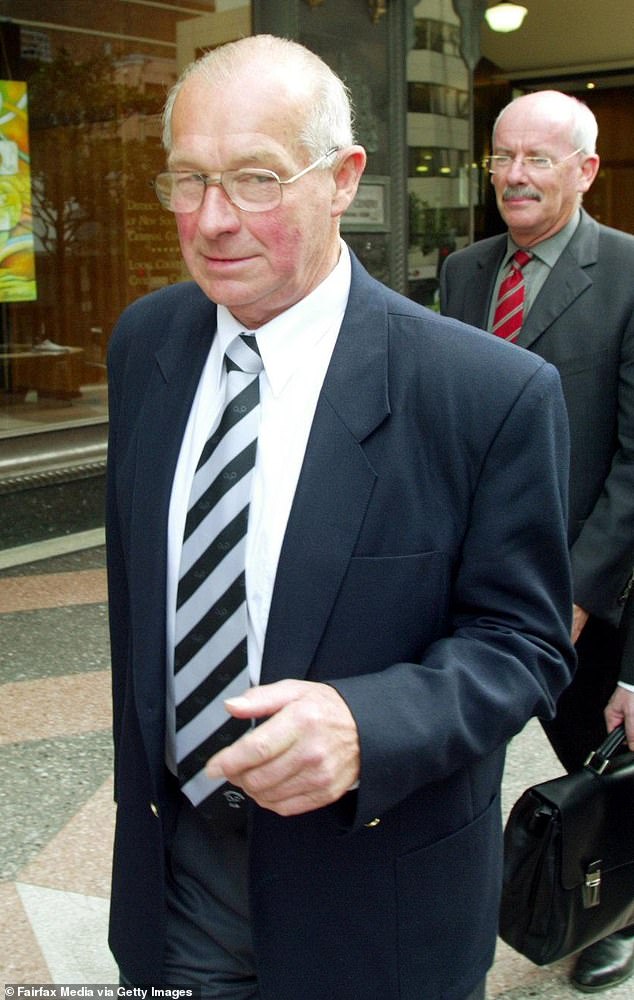 Before disgraced detective Roger Rogerson shot his way into infamy, Riley was the most notable policeman gone bad in Australia. Rogerson, a onetime associate of gangster Neddy Smith, is serving life in jail for the 2014 murder of student and wannabe drug dealer Jamie Gao 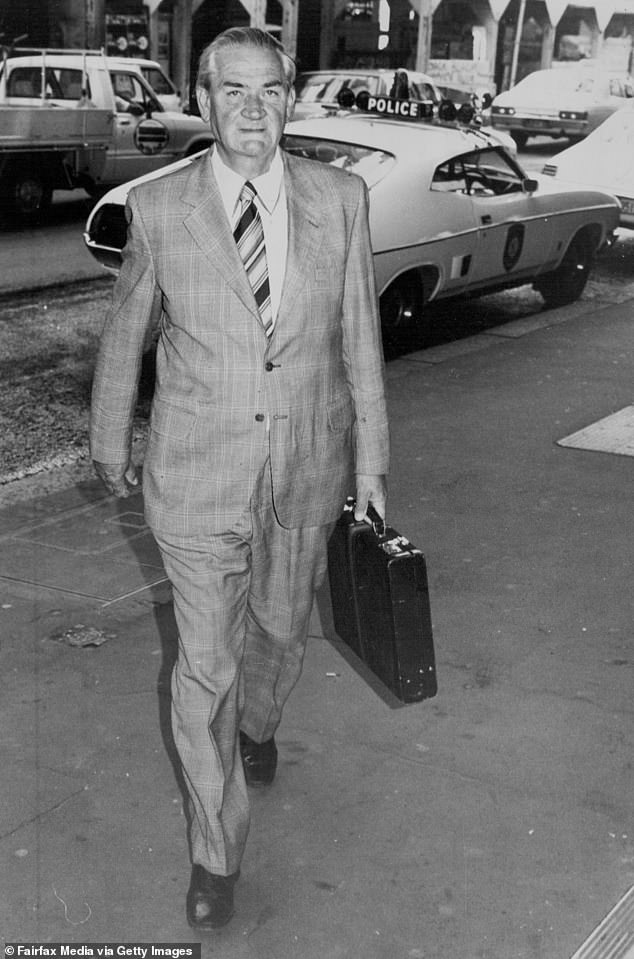 Riley joined the NSW Police Force in December 1943 and was mentored by corrupt senior officers including the notorious Ray ‘Gunner’ Kelly and Fred Krahe (pictured in 1979). Krahe is said to have had a long-standing corrupt relationship with crime boss Lennie McPherson

The 1973-1974 Moffitt Royal Commission into organised crime in licensed clubs looked extensively at Riley’s activities and associates including McPherson and Dean.

While Riley was in Sydney during the commission hearings he supposedly could not be found to give evidence.

He suddenly reappeared in public the day after Justice Athol Moffit’s report was tabled in parliament in March 1975, driving a Buick Sabre to Souths Juniors. 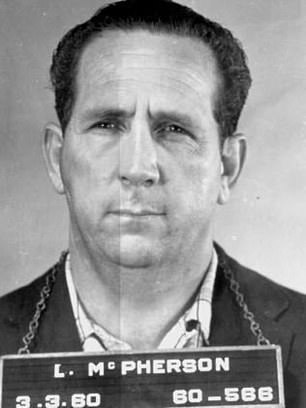 One of Moffitt’s recommendations was the establishment of the Crime Intelligence Unit and one of its first major targets was Riley.

Riley’s criminal connections extended to Sydney’s illegal casinos and he formed a particular allegiance with Mick Moylan jnr, who ran the 33 Club at Darlinghurst.

Moylan made Riley the supervisor of a syndicate importing heroin and the pair took trips to the United States to forge alliances with American criminals.

Riley travelled to San Francisco and met mafia figures including killer James ‘Jimmy the Weasel’ Fratianno and Sal Amarena of the Trafficante family.

The Moylan syndicate employed female croupiers from illegal casinos including the Double Bay Bridge Club and Telford Club to act as drug couriers. 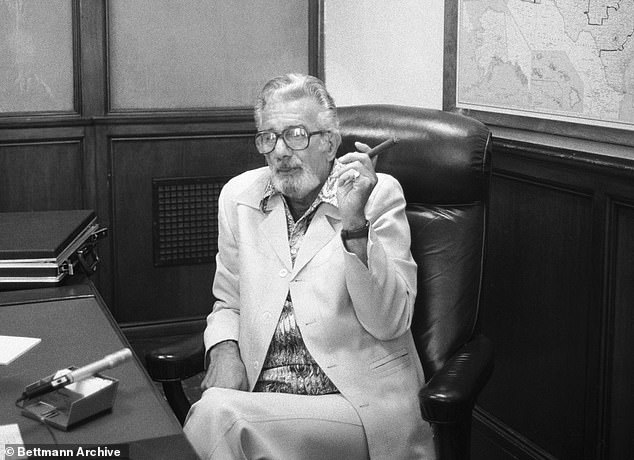 Armed robber Neddy Smith entered Riley’s world about this time and after a brief apprenticeship in heroin importation went out to establish his own connections.

Smith devoted a chapter of his memoir to his dealings with Riley, who he said kept himself in good physical shape and was always immaculately dressed.

‘Murray Riley was an old rogue and a likeable one at that,’ Smith wrote. ‘I had a lot of time for Murray.

‘A few people have said Murray was an informer. I did millions of dollars of business with Murray and he never tried to harm me in any way.

‘Murray kept coming up with scams worth plenty of money. Not a lot of Murray’s scams amounted to anything… but when one came off, it produced huge earns for one and all.’

Riley was named in the Woodward Royal Commission into Drug Trafficking (1977–79) as being involved in importing heroin from Bangkok.

By then Merv Wood had become commissioner and despite admitting to regularly lunching with Riley claimed there was no organised crime in Sydney. 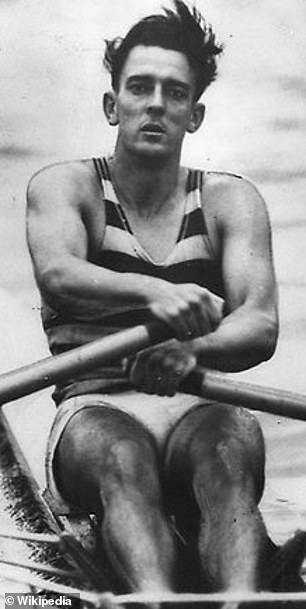 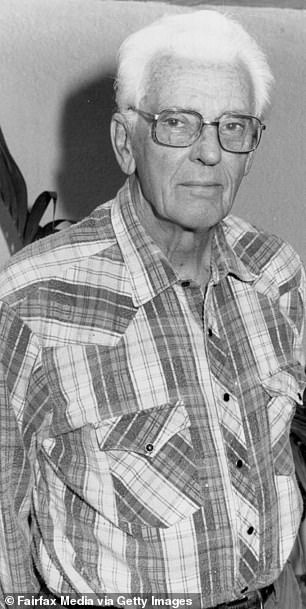 Merv Wood, who was Murray Riley’s double sculls partner at the Melbourne Olympics and NSW police commissioner from 1977 to 1979, is pictured in 1952 (left) and at home in 1987 (right)

Wood’s links with Riley were a factor in him resigning as commissioner in 1979 after just two and a half years in the position.

In 1978  Riley had masterminded an importation of 4.5 tonnes of Thai buddha sticks on board a fishing vessel called Choryo Maru.

When that boat ran into trouble the drugs were offloaded into the wreck of another vessel, the Amagi Maru, which had run aground on a reef east of Papua New Guinea.

The yacht Anoa was then dispatched from Cairns to collect the haul and sailed back down the east coast of Australia carrying 2.7 tonnes of cannabis.

State and federal authorities, including the armed forces, tracked the yacht, which was to be met by Riley on the NSW south coast at Bermagui.

When the Anoa was forced to offload 1.5 tonnes of the drugs at North Haven wharf near Laurieton on the NSW mid north coast police swooped.

While most of the syndicate was rounded up quickly, Riley was arrested three weeks later in Adelaide and pleaded guilty to conspiring to import cannabis.

He was jailed for ten years and got a further seven years for offences including possessing an unlicensed pistol, forging a passport application and conspiring to defraud American Express of $274,000. 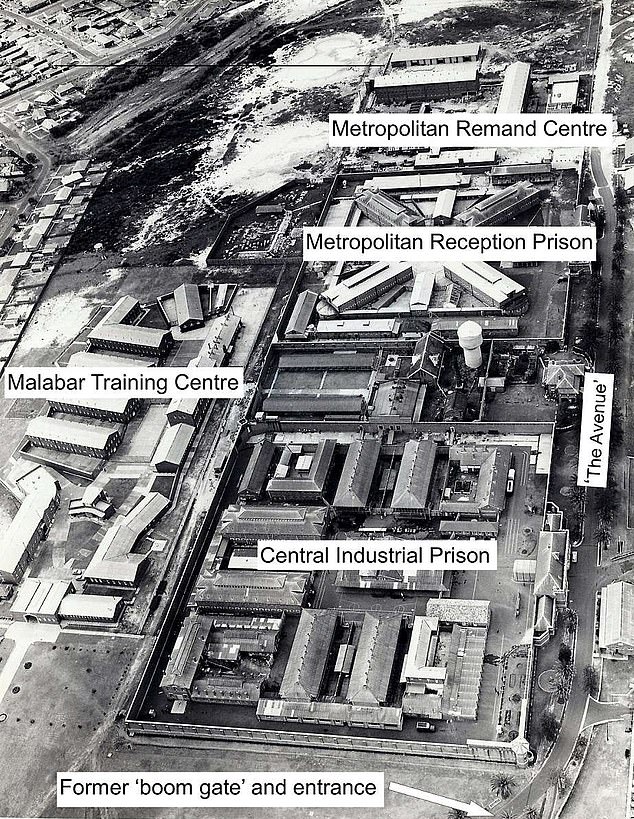 While a sentenced prisoner Riley was allowed to stay in the relative comfort of Long Bay’s Metropolitan Remand Centre (MRC) with inmates including Neddy Smith.

Smith recalled being transported to Central Local Court with Riley, ordering a few dozen cans of beer to their holding cell and returning blind drunk to the MRC.

In a May 1980 interview with Daily Mirror reporter Mike Munro, held in the office of the MRC’s superintendent, Riley denied he had been allowed to take regular outside excursions from the prison.

In 1985 Riley collaborated with Smith, pilot Peter Johnstone and others in a failed venture to fly heroin worth $40million from Thailand through Papua New Guinea.

In October 1990 Riley was arrested in Britain and charged with conspiring to defraud British Aerospace of £40million. 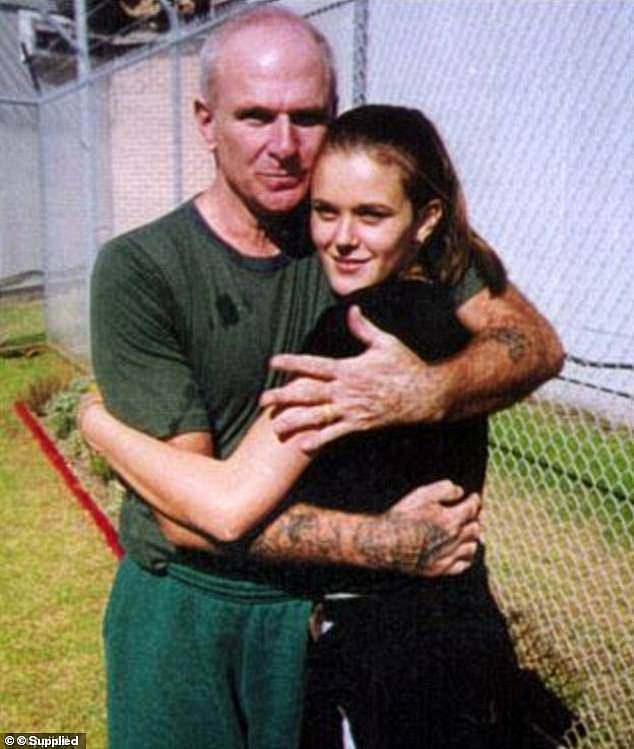 Riley collaborated with Neddy Smith and others in a failed venture to fly heroin worth $40million from Thailand to Australia through Papua New Guinea. Smith, who is serving life for murdering brothel keeper Harvey Jones in 1983, is pictured in prison with daughter Jaime

He was convicted and sentenced to five years but in December 1991 walked out of the low-security Spring Hill Prison at Aylesbury.

Riley travelled to Northern Ireland where he was in contact with the IRA, then Spain and Belgium before he was recaptured in Essex eight weeks after his escape.

He was soon transferred to another minimum-security prison in Kent, from where he again escaped in January 1993.

Riley next turned up in Hong Kong from where he flew back to Australia in early 1994, settling in Queensland and living quietly as Murray Lee Stewart.

A British Home Officer spokesman later said it was unlikely Riley would be extradited due to the cost of bringing him back to serve a sentence for a ‘victimless’ crime.

Riley’s partner politely declined to comment when contacted about his death on Wednesday and his funeral was not announced publicly.